The small beach town quickly developed a reputation for its party scene, including the Beach Bash at Sharky’s – a weekly event that promoted getting together with a few thousand fellow spring breakers for some fun, sun and music.

A post Spring Break meeting determined that Collegiate Marketing Group (CMG) would jump on board immediately and begin working towards giving the 2013 event it’s required fine-tuning. The CMG team began by re-branding the party as the Beach Bash Music Fest – a daytime beach event that would feature the largest stage on the beach and various music acts to perform to massive crowds each week in March.

CMG’s campaign to restore this as the “biggest daytime event in Panama City Beach” began first by luring major sponsors as partners. CMG sold the concept of branding the largest stage on the beach to Joose – a malt beverage brand looking to gain some much wanted added exposure among its key demographic. 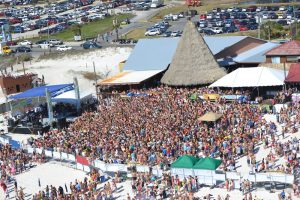 It’s more than safe to say that the 2013 Spring Break Beach Bash Music Fest events were a resounding success having average attendance numbers of over 7,000 students.

For more information on CMG and how your company can utilize the promotion and events team, please visit www.cmgmediaagency.com.