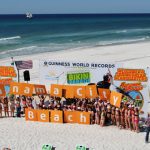 Registration began at 9:00 a.m. at Harpoon Harry’s Gulf front restaurant, where spring breakers and locals signed up for the parade. Participants were given official Bikini Parade hats to wear that signaled to officials which women were part of the march. The hats were in compliance with the rules of the event, which stated that bikinis of all colors and design were welcome, but tankinis, one-piece suits, shorts or cover-ups would not make the count. Additionally, event organizers provided complimentary SoBe beverages, admission to the celebration event and a memento T-shirt in appreciation of participants’ efforts to bring the record stateside.

Following the one-mile march, an official Guinness World Record adjudicator announced that the record had been broken at 1:30pm.

“We are thrilled to have challenged and broken the record for the World’s Largest Bikini Parade” said Dan Rowe, president and CEO of the Panama City Beach Convention & Visitors Bureau. “Many thanks go to the wonderful participants who helped bring the record where it belongs – our beautiful beaches.”

For more information on Spring Break or to book a stay in the destination, please visit www.pcbeachspringbreak.com. Students can also follow Panama City Beach Spring Break on Twitter @springbreakpcb to receive up-to-the minute news and details on special offers and deals.